Valley Of The Gods Online Slot

We present you the Valley of the Gods video slot from Yggdrasil. Here an abundance of treasures awaits the daredevils who can easily take them. Want to feel yourself like Indiana Jones or Lara Croft and get a good win? Then you are definitely here!

From the first seconds of playing the game, a certain mystery is felt, and in the meantime, the slot machine provides 5 reels and 45 active lines. In the beginning, you may be somewhat discouraged by the fact that some cells on the reels are blocked by gold scarabs.

However, from the first spins, the gameplay becomes clear to you. With each new spin, you must destroy the scarabs that block the cells on the reels, which allows you to boost your wins. In the demo mode, you may try out many features of this video slot. This implies that you may play for free to understand the ins and outs of the video slot before betting real money.

The percentage of return to the player is 96.2% here. As well as a staggering number of possible lucky combinations, reaching 3,125, you should try to play this game. Anyway, first, learn how to play Valley of the Gods slot machine review. 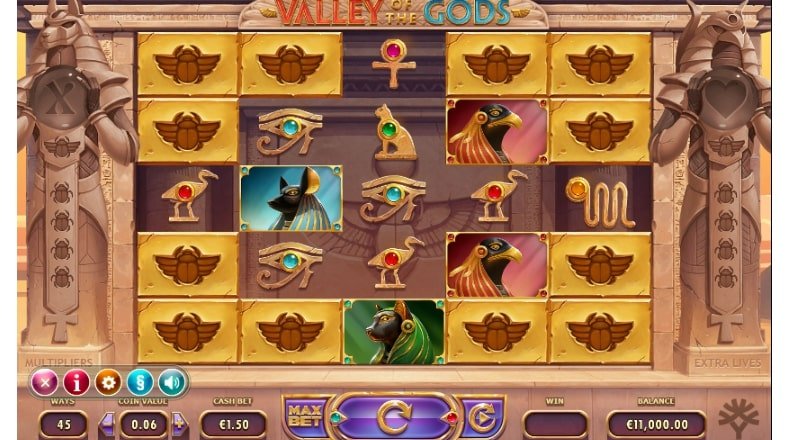 The culture of Ancient Egypt is known worldwide. Their Pantheon of Gods and sacred symbols took root in modern society. We all know at least one or two Egyptian gods, as well as many symbols, for example, the eyes of Horus and the ankh.

It is not surprising that creating this slot, the developer got inspired by the ancient Egyptian culture which was revealed in the game icons. Check them out:

Stop using spells or apply cunning strategies to destroy the scarabs. The game does this for you. All that is required is to receive a winning combination and it does not matter what value of the symbols that fall out and what the face value of the coin will be. As soon as you get a winning chain, you receive a Respin feature as a reward.

Respin That Will Make You Win

This means you get an extra spin at the bet which brought you a prize combination. Thus, depending on the size of the win, a certain number of scarabs will be destroyed. 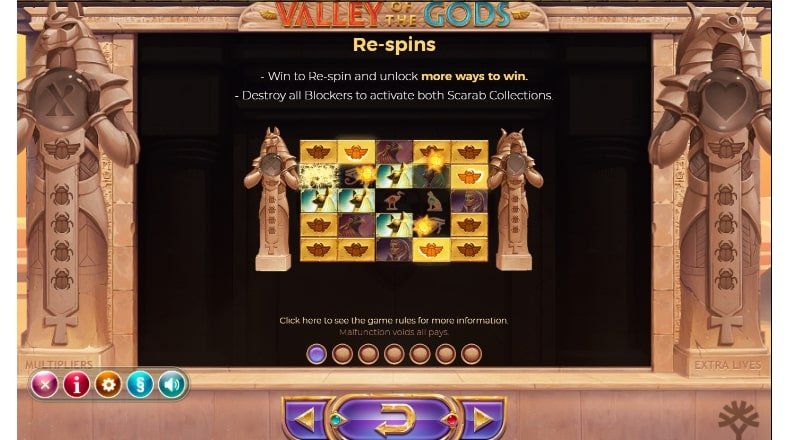 When you move to another game stage with respins, these spins continue until winning combinations cease to form. With every such combination, more and more scarabs will be destroyed and more cells will be free from the block on the reels. When all the scarabs are wrecked, the player can take advantage of the main feature in the Valley of The Gods game.

One of these game features is the possibility to get 1 extra life, which works on the same principle as Free spins in many other slots. On the right side of the screen, you can see the statue of Horus holding the ball, and as soon as you get an extra life, the ball glows with a red light. 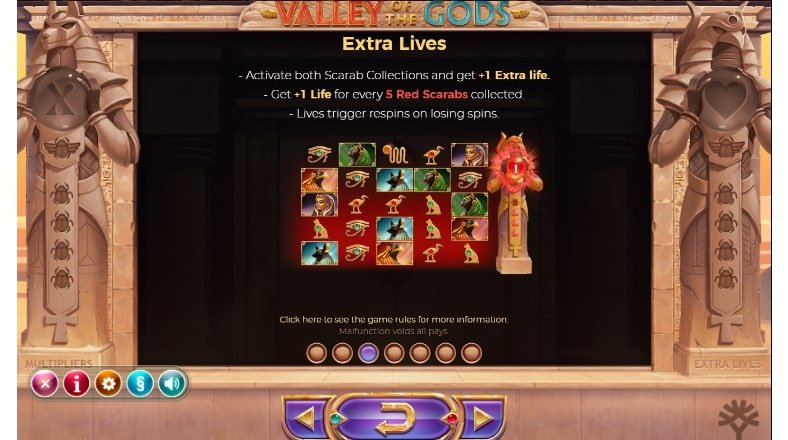 If you keep building the winning combinations in a game, then the color of the ball will gradually change — first to orange, then to purple, and finally, it will turn pink. This light is an indicator of how many lives a player has collected. For every 5 scarabs, you get an extra life. As soon as you use up all your life, the scarabs refill the reels and the game restarts. These features of the gameplay make up for the lack of wild and scatter.

The function, during which the multiplier acts, is activated for each win that follows the Respin. This means when you use up all your extra lives and bonus repeat spins, the multiplier coefficient becomes zero again and the game starts again.

Even if you are not a fan of the Egyptian theme slots, this game will bring a lot of fun to anyone who decides to play it. The Valley Of The Gold video slot is a real masterpiece with unusual gameplay which requires to destroy the scarabs, blocking the cells on the reels and win great rewards. By the way, the music of the slot that brings the atmosphere of the mystery and high-quality symbols are proof of the great work of the Scandinavian developers.