Alchemy is a science that has always caused a lot of controversy among scientists. Somebody considers it is a discovery, others call it a pseudoscience. Play’n GO has unveiled its version of this theme to the world with the release of the Sweet Alchemy slot.

The plot of the Sweet Alchemy slot machine is dedicated to a wonderful girl, a little fairy who can do magic. Due to some bizarre manipulations, she creates amazing sweets and helps the player to create winning combinations. With a successfully established chain, sweet elements will explode, empty places will be filled with higher new goodies. Therefore, one round can bring a huge number of successful combinations.

This video slot will attract those users who love bright graphics, as well as those who want to win in non-standard ways. All players who believe in magic will have an exciting journey into the world of magic tricks. A fairy with a magic wand will fulfill all wishes.

Alchemy provided by Play’n GO is significantly different from ordinary science: instead of chemical elements, 25 images of various sweets are presented here. They compose winning combinations which will bring pleasant bonuses. The RTP reaches up to 96.05%. 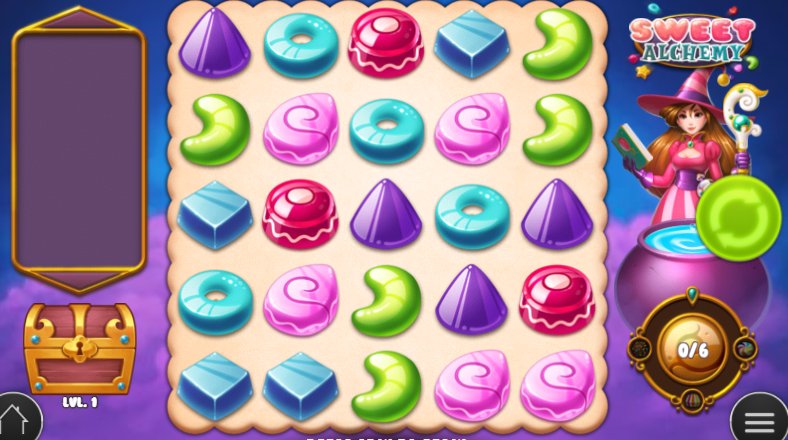 The Sweet Alchemy video slot provides ordinary icons, several types of wilds, a level system, bonus draw games, and some additional features. Payments are credited for at least 4 identical symbols that vertically or horizontally go one after another. After the payouts have been credited, the pictures in the chain explode. Their empty positions are occupied by upstream objects and new candies. Let’s get familiar with some other special goodies presented in this enjoyable game.

The structure of the slot machine is standard. It is based on 5 reels, however, they are placed not according to the 3 by 5 principle, but in a square grid. You can earn up to 300,000 coins per spin. The game return rate is more than 96%, which can be considered a very high indicator.

The betting system is diverse and opens up a wide field for experimentation when playing in an online casino. The maximum you can invest is £100, and the minimum is 0.1. The player chooses the number of lines and configures the denominations.

Despite the nice offer, this game cannot be played with a bankroll of less than £300 if you are chasing big wins. The sound of the slot is easy and pleasant to hear, while the usual in-game options like Auto Play, Max Bet, and coin range settings allow you to set your own playing style.

In Sweet Alchemy game, combinations are made up of eight types of base pictures. These are candies of various shapes and colors. Many surprises are waiting for players, we speak about the presence of 3 Wild symbols: 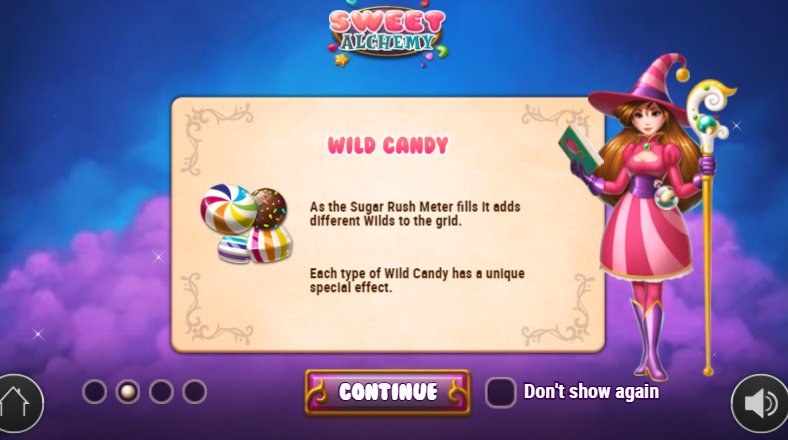 To sum up, the player must be ready for the three functions of the wilds that will:

The developers have filled Sweet Alchemy slot machine with various bonus games. Access to them will open gradually during the game. Let’s check out the opportunities of bonus perks here:

Sugar Rush Meter. On the right side of the screen, you will see a scale that gets filled when combinations are formed. When the level reaches the first division, the alchemist adds two ordinary wilds to the field. On the second control point, two Striped Wilds are activated, and after the third, Dotted Wilds are launched. If the scale reaches the end, another bonus round begins. 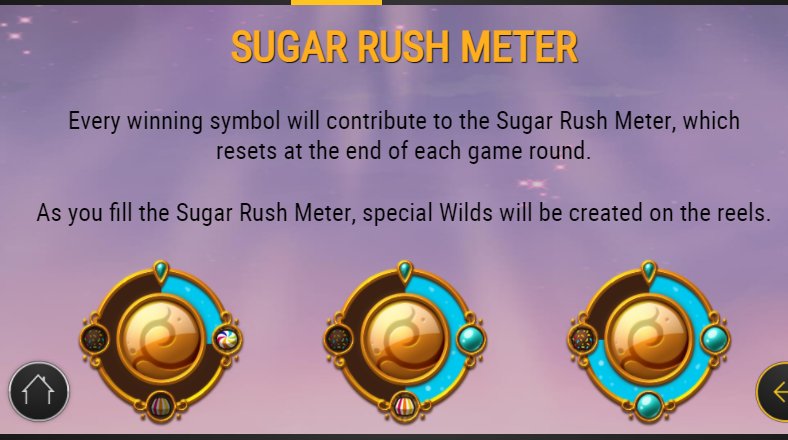 Mix the Elixir Free Round. This bonus game means you can freely play for casino money. The game is played on a 9×9 screen. Three levels and three Candy Spells are available here. We are talking about bonuses of several types that help to make up pay lines. All of them are explained at the start of Sweet Alchemy. 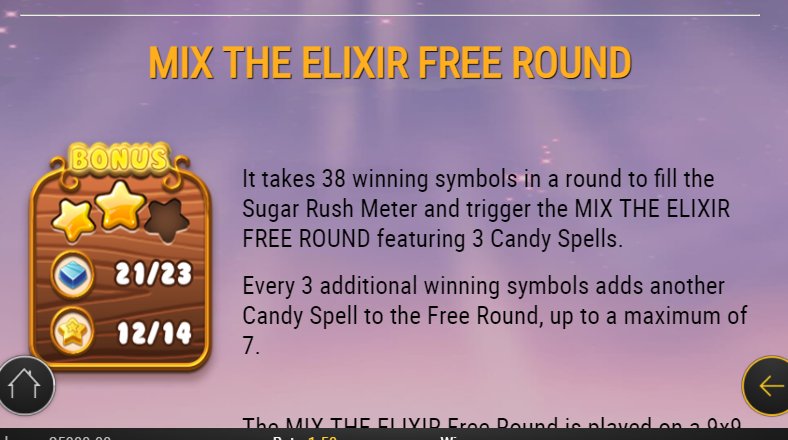 Elixir of Power Bonus. In this round, players have to choose pieces of chocolate where different elixirs are hidden. When a player collects three identical elements, he/she will get a reward. The type of elixir and rate determines the amount.

Map. Each time a player goes to the end of the Mix the Elixir Free Round, you take several steps on the map where you can win a chest of gold. For every third level completed on the Map feature, the scattered treasure chests show cash prizes. The rewards are pretty good and this is one of our favorites. 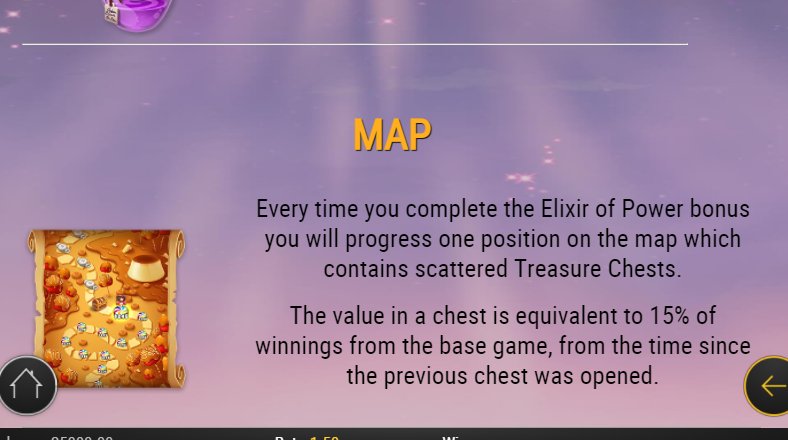 Gamblers love Sweet Alchemy for the fact that prize combinations are pretty regular here, this means the playing process is not only funny but also profitable. Other benefits of this game include a fascinating plot, large payout ratios, high return. Sweet Alchemy is famous for the perfect combination of the old school slots traditions with the latest technological developments. Those players who believe that excitement cannot exist without real money reward, Sweet Alchemy video slot will please them even more because of its plot, the colors of graphics, as well as great opportunities!