If you like video games and casino games, then you should definitely try out the latest Max Quest: Wrath of Ra slot developed by Betsoft. This game resembles a modern shooter, however, the playing process is based on the RNG technology. You will not find the usual reels and pay lines here, but the chances to win real money do not fade away at all.

The theme of the Max Quest: Wrath of the Ra is connected with the secret treasures of the ancient Egyptian pyramids. You will find a gloomy place where mummies and scarab beetles roam the ominous tombs that guard the numerous gold of the ancient pharaohs.

In total, the online game provides 4 locations that differ in their graphic design, as well as player’s bets. All rooms and characters are produced with the help of 3D graphics, which makes the gameplay realistic and incredibly exciting.

Here players can use a demo version of the game where they are not required to make real-money deposits. Moreover, it is possible to learn all the slot’s features, explore the game symbols, check the payout table and calculate the risks before playing for real money. See more details in the Qyto Max Quest slot review. 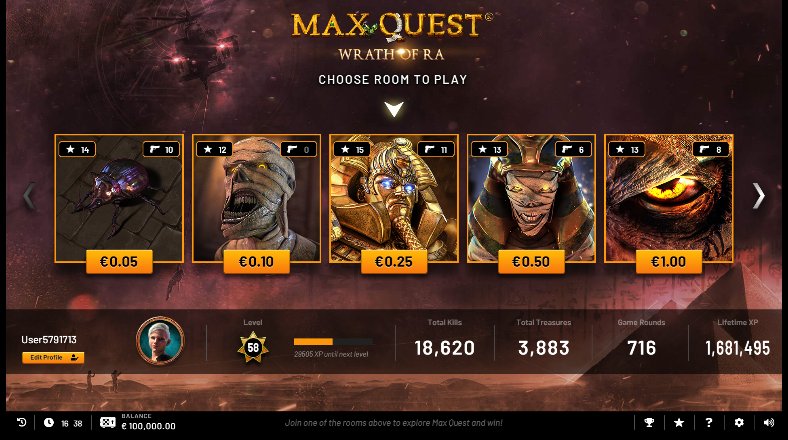 The game is not as complicated as it seems at a glance. In fact, the goal is simple — to collect bonuses, shoot, and destroy approaching ghosts. To do this, you get a weapon and each bullet is your bet.

Every location has its own minimum bet and payout ratios:

Let’s find out all the nuances concerning the slot below.

At the first stage, the player is invited to select a character and enter a nickname. The next step is to buy weapons. Remember, the choice depends on your preferences and financial capabilities: in the arsenal, there are both pistols and plasma rifles.

Bullets are an analog of bets, so the cost of one shot differs. Within the gameplay, you will have to fight with enemies of different levels which can bring some good wins. Moreover, Little Scarab can increase winnings by 50 times. And the Resurrected Mummy of Fire gives a multiplier of up to 5,000x.

However, the player receives the biggest prizes after battles with the gods Ra, Osiris and Anubis in the God Event round. To win here is not an easy thing but if the gambler succeeds, impressive sums await. The size of the gain depends on the type of weapon and the damage caused. 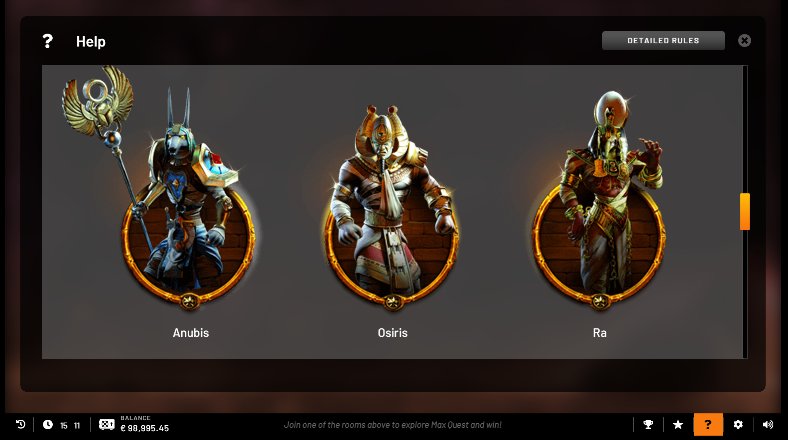 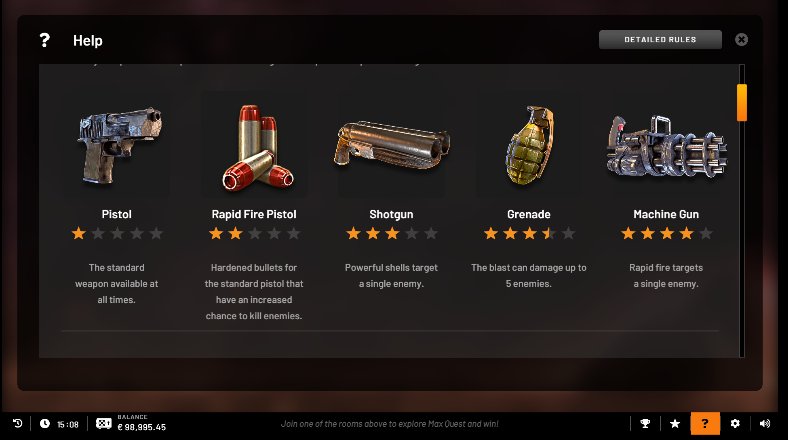 How To Play Max Quest

While destroying the tomb guardians, you will receive special rewards. You can shoot either in manual or autoplay mode. Moreover, each character you killed provides a reward. In classic slots, a win can cover expenses, or it may turn out to be less than a bet. However, occasionally appearing bonuses allow gamblers to play profitably.

As you see, the slot does not belong to classic slot machines, so the functionality does not provide traditional Free spins. Instead of them, players receive special weapons and have a chance to gain free shots to boost the rewards. 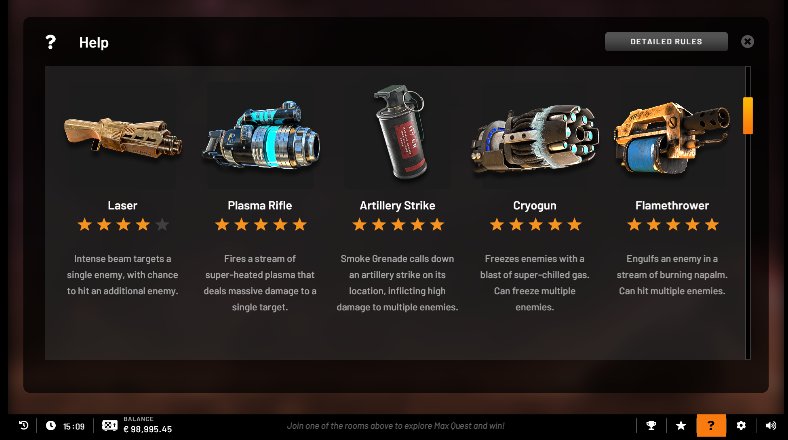 As in any computer game of this type, you can buy special weapons and ammunition in the Max Quest Anger Ra online gambling slot. To do this, click on the button with the dollar icon. You will see three chests with special value in each of them.

The larger the box, the higher its price, but the box full of the weapon is the more powerful feature. Additionally, there may be some other ammunition inside.

In developing the game, the company devoted all its attention to visual effects, so there is no jackpot in the classical sense of the word. But in return, many opportunities are offered to increase the gain in the battles. 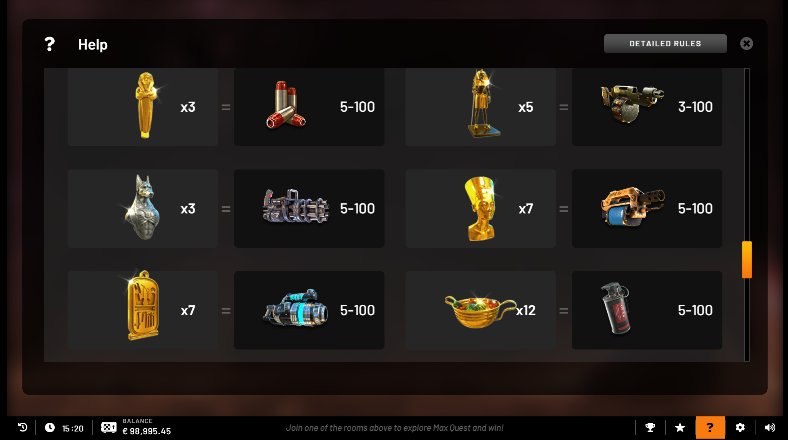 Defeating the Risen Fire Enemy will bring an amount that is 5,000 times the size of the bet. However, it is difficult to predict the appearance of the character. Any opponent on the field can be resurrected, and the struggle will require considerable effort. The more shots, the higher the chance of getting a prize.

To sum up, the Max Quest video slot is an unusual game with unique features including special locations for battles, weapons, shots, chests of goodies and so on. Every fan of online games will appreciate this shooting slot because it provides not only a dynamic playing process full of monsters but also generous payouts and brand-new experience in the gambling online.